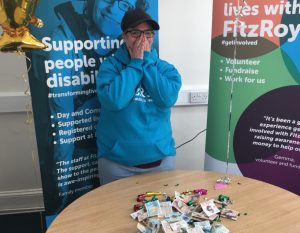 Kirsty set out in June to complete an incredible 100 miles in 100 days. Today, Kirsty is celebrating completing her challenge as well as raising more than four times her original target.

Kirsty, who we have supported for a year and a half, began her challenge with the aim of raising £100 for FitzRoy. Realising she has actually raised £440 so far, Kirsty is over the moon.

She said: I feel fantastic to have finished the challenge, I am really proud of myself and feel like I have achieved something amazing.

I didn’t think I would raise as much money as I did, I set my target for just £100! Collecting in the money was definitely my favourite part of the challenge.

I have been out celebrating this morning with breakfast and a hot chocolate.

Kirsty continued to say that she plans on keeping up the treadmill and will be taking part in another challenge next year.

Service Manager Nicola Astle, who set up the challenge for Kirsty, said: Kirsty really loves rewards and setting herself personal challenges and having a sense of achievement.

Kirsty completed her challenge this morning and she has been really excited, not only has it motivated her, but it has also helped her lose weight which I know she struggled with.

It was Kirsty’s idea to do the challenge for FitzRoy, she is a really kind and giving person. She got up religiously every morning to go on the treadmill, some mornings as early as 4.30am!

Kirsty wants to use half the money to put towards presents for everyone for the Christmas party, and the other half towards setting up an allotment with the local council which we can all use. It’s a brilliant idea because it will be a real social thing for everyone to get involved with.

FitzRoy’s Nottingham Support at Home service provides Kirsty with the support she needs to enable her to live in her own home. To help support more people like Kirsty, click here.