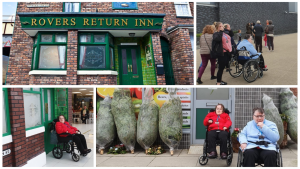 Soap fanatic Lorraine had a birthday to remember when she was treated to a visit to the Coronation Street studios.

After spotting that the studios were open for a tour, Lorraine asked if she could go. We spoke to our Coventry supported living services support worker Audra who pulled out all the stops and organised the special trip for Lorraine and her friend Rose.

â€œLorraine absolutely loves soaps â€“ her whole routine revolves around them! It was her birthday in September, and she had seen the Coronation Street studio tour advertised and asked if she could go, so of course we did everything we could to make it happen. We knew how much it would mean to her.

â€œSupport worker Leah and I managed to get the tickets, and Lorraine invited her friend Rose, who we also support, to come along. They were both really excited when they found out we’d got the tickets!

When we got there the excitement just continued to build because they could see signs for other shows like The Voice â€“ they couldn’t believe it.

â€œThe entire Coronation Street set was there; we had a great guided tour around the different streets and were told about the history and different scenes that had been filmed there. Lorraine and Rose loved having their photograph taken around the sets.

â€œThey both really enjoyed the whole experience and Lorraine loved being able to recognise parts of the set she normally watches on television. It was even more special because when we went the set was ready to film Christmas scenes, so it had loads of festive decorations around.

â€œAs part of her birthday treat, we also went out for a lovely meal at The Botanist who have a branch in Manchester. They were really accommodating.

â€œWe like to do lots of trips with the people we support but this day out was particularly special, especially for Lorraine. It was great to be a part of that experience with her and I know it’ll be something she can look back on and remember with happy memories.â€