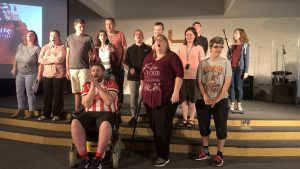 Love4Life members are ready and raring to go’ for their Cinderella pantomime next month, and we spoke to instructor Lauren to get all the behind the scenes information ahead of their opening night.

Lauren started teaching drama and choir groups at Love4Life a few years ago, and she believes everything they have worked on so far has been leading up to this performance.

When I first started at Love4Life I was teaching drama and choir but we weren’t rehearsing for any shows in particular.

The turning point was when we did the Wonderland show last year – it was a massive success. They have been learning some difficult drama techniques over the past year and that’s why we decided to try a different genre and do a pantomime.

It’s really exciting for them and for me. The group has come a long way since I started, at first I had about ten people turn up each week and now we get around 25 people. One member, Vicky, used to only come to drama and one day she said she wanted to try choir so she could be a part of the pantomime and now she’s been coming to choir ever since! She keeps saying I can’t believe I never tried choir before’.

As well as the acting, members have been learning about directing and all the behind the scenes production that goes into a show. We have even done a session where they got to design costumes.

It’s all be leading to this moment. The whole way through I have kept asking them what they want to sing and what they want to perform, I want the members to be as involved as possible with making the decisions.

It’s amazing to see what the classes do for their confidence, there are some quieter members but as soon as you play a piece of music that they like, they come out of their shell, it’s quite overwhelming for me. It’s just amazing to see it bring that side of them out. That’s what I love about it, it doesn’t matter how rubbish my day has been, being with the Love4Life members makes me feel on top of the world.

The rehearsals have been going really well they’re ready and raring to learn. I have split the script into three parts so that everybody has the opportunity to shine.

Love4Life’s Cinderella pantomime takes place on Wednesday 18 December at Fareham College from 7-9pm. Get your tickets by contacting info@love4life.org.uk