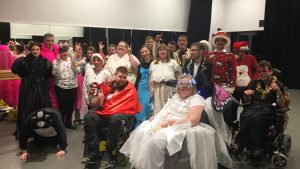 Audience members laughed, sang and danced along with the cast of Love4Life’s Cinderella Pantomime when they took to the stage last week.

The performance took place on Wednesday 18 December at Fareham College and showcased the talents of Love4Life members as they performed the Disney classic with their own unique twist.

Love4Life coordinator Hayley said: “I thought the show was excellent! Members not only had a short period in which to learn their scripts, but for a lot of them it was their first time being involved in a production.

It’s wonderful to see so many members joining our drama and choir sessions, and off the back of joining more friendships have developed.

“I am extremely proud of their performance; the audience were roaring with laughter and the compliments at the end were fantastic.

The show also included a number of hit songs, such as ‘Rule the World’, ‘Can’t Stop the Feeling’ and ‘All I Want for Christmas is You’.

Backstage, the cast were ecstatic with their performance. Grace said: “I have found it really fun, at first I was a bit nervous playing the villain for the first time but once I got on the stage it was just loads of fun getting into character.

“I think doing the show has made everybody more confident.”

The brilliant evening was topped off with a cheque presentation from Fareham Masonic Hall for £250.