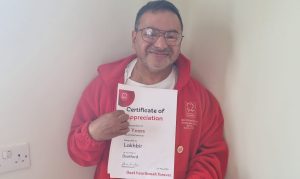 In February, Lucky will be celebrating his 60th birthday in style – as well as fulfilling a lifelong dream – when he goes on holiday to Memphis.

As a huge Elvis fan he’ll be staying at the Graceland hotel, and will visit Graceland itself of course. His trip of a lifetime is only possible thanks to the support and encouragement of the team at Pelham Road, our supported living service in Kent, and his own commitment and focus on saving so he could visit Graceland.

I feel really good and proud. I am very excited about my holiday and looking forward to going to the Hard Rock Café.

At Pelham Road we support six men with learning disabilities so they can live independently. From day one Lucky told staff it was his lifelong dream to visit Elvis’s home, so we knew we wanted to support him to make it happen.

We had got to know Lucky before he even moved in, as we support his friend John at Pelham Road, and Lucky would visit every other weekend. When the person Lucky used to house share with moved out, Lucky asked if he could move into Pelham Road with John. The local council agreed, and we were only too happy to have him.

Service manager Debbie said: “Lucky is a very independent person who has been volunteering at a local British Heart Foundation shop for 15 years. We had to explain to Lucky that if he really did want to make his dream a reality, he would have to start seriously saving. We sat down together and looked at his finances and ways he could manage his spending.

“We also sorted his bank accounts so he had a savings account he couldn’t touch, his bills account and then a weekly spending account. This meant he had control of his finances, and knew what was coming and going, which took away a lot of his frustration and anxiety.

“He had to really change his focus and although he sometimes found it hard, when other people were going out more than him or buying things,  we encouraged him and reminding him of why he was saving, and he stuck with it.”

I am so proud of what he’s achieved for himself.

By the end of 2021, Lucky had saved enough money and was able to start seriously planning for his trip. The team at Pelham Road have been working closely with a tour operator to take him on a bespoke package for one week in Memphis to coincide with his 60th birthday. The itinerary is now in place and the Graceland countdown is on!

We’ve said to him to take a fairly empty suitcase because he’s going to be buying a lot of stuff to bring back!