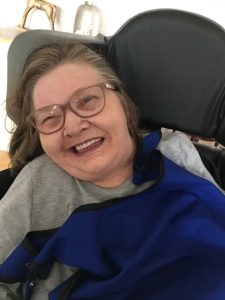 After a short stay in hospital, Mary, with the help of our fantastic team, has kicked her 60 year smoking habit and is excited about new opportunities and new experiences now open to her.

Mary is 71 and lives at our Hawton Road supported living service in Newark, Notts. In 1981, she suffered brain injuries in a road traffic accident. As a result, she has short term memory loss. This memory loss impacted on her smoking habit – Mary would often ask to have a cigarette not remembering she had finished her last one just a few minutes before.

Mary started smoking when she was just 12 years old and at one point was smoking 40 cigarettes a day. Smoking was not only affecting her health but had effectively taken over her life as she would not go anywhere she couldn’t smoke. Once smoke free areas became more and more This made the world a lot smaller for Mary, as she couldn’t take long journeys on public transport, she couldn’t go to the cinema or any of the things that she enjoyed.

FitzRoy started supporting Mary five years ago and over the course of a number of years the team managed to encourage Mary down to around 20 cigarettes a day with the aid of encouragement and distractions and a lot of patience.

However, in April this year, Mary became ill and was admitted to hospital for eight days. During this time, she was not allowed to smoke and was provided with nicotine patches. When she came out of hospital, Mary surprised staff by not asking for cigarettes but continued to use patches. The team were only too happy to support Mary and encourage her to continue.

We are now four and a half months down the line and Mary is still not smoking. This is an absolute massive achievement for her and we are absolutely amazed and so proud of her.

“We are supporting her every day to keep this up, reminding her that she doesn’t smoke anymore, telling her how well she’s doing and how her breathing and cough has improved.

“Mary is very proud of her beautiful home and she is very pleased that it doesn’t smell of smoke.”

Mary is currently awaiting a new wheelchair and is busy making plans to go to the cinema, bingo and shows as well as going further afield to the seaside, all of which she hasn’t been able to do for years.