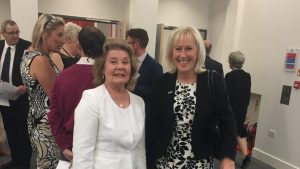 FitzRoy are delighted to be one of the chosen charities of the Mayor of Havant, Elaine Shimbart.

“As Mayor, I am able to choose and support one or more charities during my Mayoral year. This year I have chosen Home Start Havant, for whom I was a volunteer, and FitzRoy.

The reason that I chose FitzRoy as one of my charities is the fact that Michael, my brother-in-law, has Down’s syndrome and I know of the many challenges he has faced throughout his life.

Michael is now in his 60s and when he was young there were no organisations like FitzRoy who could offer support and opportunities for people, such as him, with learning disabilities.

I believe that one of the most important things achieved by FitzRoy and their Love4Life project is the fostering of friendship between young people who, because of their disabilities, could otherwise become isolated.

I will be doing other things to support my charities during the year including a parachute jump along with the Lord Mayor of Portsmouth, and the Mayors of Fareham and Gosport.

I hope to be as involved as I can with FitzRoy during my Mayoral year.”

We are extremely grateful for Elaine’s support this year. A huge thank you from everyone at FitzRoy. If you would like to find out more about the Mayor’s events, please email Jim fundraising@fitzroy.org.