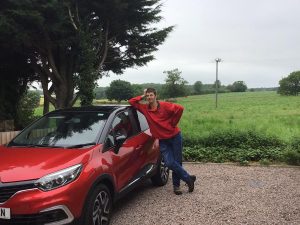 Liam recently made the move out of his family home into his own place at Lethrede, FitzRoy’s supported living service in Suffolk.

We caught up with his support worker Jonathan Campling to find out how it was going.

Jonathan said: “Before Liam’s big move, he had never slept anywhere without his mum or family, and we weren’t sure if Liam would manage to stay the night without someone else sleeping in his flat with him. We reassured Liam that we’re there if he needs us, that we are with him up until 10pm anyway, and after that he knows that if he needs us he can just ring us. From his first night onward, we have had no issues and he has slept really well, which is a massive achievement for him.

“Liam is in his early 20s and a very positive person with a great sense of humour. And he likes cars. He has quite a few model cars that he likes to play with and he recently got his own car which he is very proud of – he’s been telling me how he might dedicate a day in the week to wash it.

“Although Liam has his own car now, one of his favourite things is to go for long walks. He really enjoys being outside and he likes to be social. He enjoys being with others and has already built up good social interactions with the staff at Lethrede. Liam normally greets us from his front door or window when we turn up for work and enjoys having banter with us, as he gets up early in the morning. He waits for deputy manager Harry to say good morning to him and has a bit of a joke with him then hands him a list of things he would like him to look at. As Liam doesn’t read or write, Harry then has to turn detective to find out what Liam would like.

“Liam and all the staff at Lethrede are looking forward to the future, to help support him to achieve his goals and aspirations.”