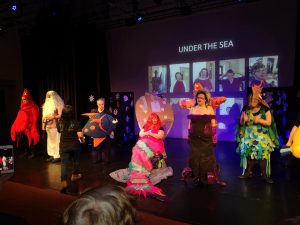 Members of On Track were the stars of the show in their Disney spectacular performance.

After a year of preparation, research and rehearsing, members took to the stage on Friday, 11 October to wow the audience with a variety of Disney classics.

Erika, Support worker at our Hampshire day service, said: “It was absolutely brilliant. All our members love Disney so when it was suggested as a theme of course all they all said yes!

I am so proud of everyone. It’s not always been easy in rehearsals, we have tirelessly practised and they do get tired sometimes, but unbelievably they channel this inner strength and confidence when they get up on the stage. They get it right and they are on point, it’s fabulous.

“My personal highlight of the evening was Lisa as a mermaid and as Belle, but everybody was absolutely brilliant. Andrew did a song from Lion King which was great, he’s very theatrical. Toy Story was a brilliant routine because everybody was in it, and even though it wasn’t Disney they sang This is Me’ in the finale, which was a bit of a tearjerker. They really made a statement.

“Our drama groups are one of our best sessions, everyone wants to be in drama! We generate our own money for it, and we use the money we get from ticket sales to buy props and costumes.

“The benefits they get from putting on shows like this are amazing, it really builds their confidence because they have their time to shine and to be recognised. They get to feel spectacular. They are the stars, after all, and it just goes to show they can do anything.”

Erika continued to say that next year they will be joining forces with Waterlooville day service and will be performing a variety of songs chosen by the members themselves.

“A lot of work went into putting the show together – support worker Lhamo did all the dances – if it wasn’t for her the show wouldn’t have been a show. Her daughter Dana did all the backdrop lighting which was fantastic, and we had a photographer Richard Welch who was brilliant. A special thank you goes to Judy Waight who did all our costumes. Without people like Judy I don’t know how this could all be possible. The quality of costumes she produces is incredible.

“The whole show has been an incredible experience and I can’t wait until the next one. I have worked here 15 years and I still can’t wait to come into work and I still wish there were more hours in the day.”

Read About Love4Life’s Brilliant Show ‘This Is Us’ Donate