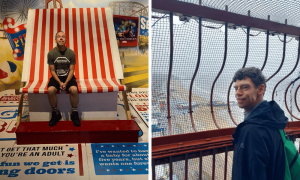 Lee and Chris both overcome the anxiety of Covid lockdowns to enjoy a holiday away this year for the first time since the pandemic began.

At Cloverlands, our supported living service in Nottingham, the staff have supported Lee and Chris for eight years. The men are both in their 30’s and very independent, and both have Williams Syndrome, a rare genetic condition.

Covid had a huge impact on their emotional wellbeing.  Sadly, Lee’s stepfather died of the disease and Chris lost his father around the same time, though not related to coronavirus. Lee began obsessively washing and cleaning, while just Chris retreated into his room.

Deputy manager Chloe said “Despite their sharing the same condition, Lee and Chris are really polar opposite personalities, and we respect those differences in how we’ve approached supporting them through the pandemic. Encouraging Lee not to wash things again that are clean, showing him they’re clean, and with Chris it was more about getting him out of the house but feeling safe.

“They both watch a lot of news and so this year they were hearing less about Covid and less about people getting ill and dying and so they were able to understand that things were maybe a bit safer.

“They each chose their hotel and who they wanted there to support them, and both had a fantastic time.

“Since they’ve come back, they’ve been far more outgoing. Lee has been seeing his friends for the first time since before the pandemic, going bowling and to the pub. Chris was also looking more positive too, but then he caught Covid himself and that set him back a little. He’s looking forward to our Nottingham Christmas party now though so that’s really positive. There’s no way he would have done that last year.