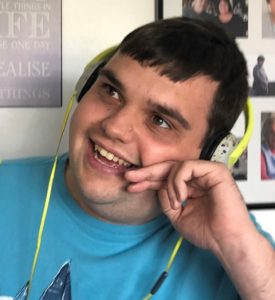 Five years ago, we first talked to Peter’s parents, Pat and Rob, about their struggle to get the right care for their son.

Pat adds: “Peter needed support all the time and it wears you out, it’s 24/7. I couldn’t go out, and if he became challenging in the house, I would crawl under the dining table and pull the chairs around me to protect myself.”

“We decided to really look at supported living. After initially rejecting this option thinking lower cost meant lower quality, we began to warm to the idea.  Rob said:  “FitzRoy was number one for both of us; they were head and shoulders above the rest, spoke from the heart and clearly knew what they were talking about.”

Leading up to the move, Pat admits: “I didn’t want Peter to feel that he was losing his mum. There was heaviness on my heart that was like nothing else I had ever felt.”

Now, Rob and Pat say that, beyond their expectations, Peter is a changed man.
Pat said: “Peter’s a young man enjoying life, with people his age. He was ready to move and it’s lovely for me as I can just be his mum again.”

We recently caught up with Pat for an update on how things are going with Peter.

“Peter’s been in supported living seven years in FitzRoy’s Nottingham supported living service, with a team of seven carers. He has a lovely social life. He goes walking, swimming, bowling, to the pictures, eating out. The carers try different foods on his menu to keep him healthy and happy.”

Peter is respected as a person. The carers are lovely – we have got a lovely team, they are more like family to me.

“I phone everyday and go and see Peter four times a week, which I love. When he’s had enough of me, he gets up off his settee and says “bye” – and that’s time for me to go!

“The nicest thing is I can be mum now, instead of being a carer. Peter has a good life, that’s what every parent wants for their child and it’s peace of mind knowing he’s okay. Just because your child is in supported or residential care doesn’t mean you have to stop being mum or dad – that will never happen!

“I say to parents, I want my child settled and happy before I’m pushing up daisies, and he is. It took me awhile to let go, but I made the right choice by picking Fitzroy.

“We’re parents that love our son unconditionally, and we fight hard to get Peter what he needs. That will never end as long as I live. I am really proud of the team, being a carer is not easy and it’s not for everyone, but the team are doing brilliantly, thank you.”