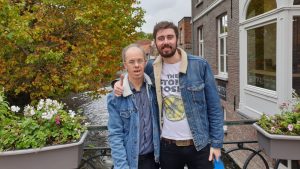 Peter and Phillipa got the chance to make memories and celebrate friendship when they hopped aboard a mini cruise to Bruges.

Both Peter and Phillipa have lived at Donec Mews, Hampshire, for more than 50 years. Donec Mews was FitzRoy’s first ever service bought by Elizabeth FitzRoy 57 years ago. Peter and Phillipa both have an interest in travel, so they decided to test the waters of a mini cruise and set sail to Bruges.

Karen Bond, service manager at Donec Mews, said: “Phillipa and Peter both love to travel but had never been on a cruise ship  so this was perfect for them to try out.

“They decided on a mini cruise to test out whether they would want to do a full one next year  and they both really enjoyed it. They set off on Friday 18 October from Southampton to Bruges and were back on the Sunday.

“Originally the holiday was for Katie and Phillipa, but sadly Katie passed away earlier this year, so Peter went instead. Phillipa was very close friends with Katie so for her the trip was about the memory of her friend.”

Peter and Phillipa were supported on their adventure by support workers Michael and Veronica.

“When they got to Bruges, Peter and Michael got off the boat to explore and Phillipa stayed on the boat with Veronica. Peter really enjoyed looking around the Belgium city, they stopped at a few places for a drink and had a great time.

“Peter and Phillipa both had a great time and I think they would do a bigger cruise in the future.”

Read more of our latest stories: