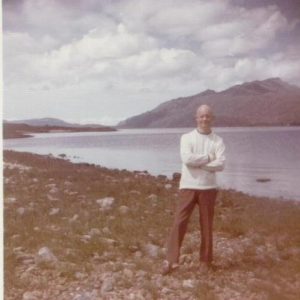 We celebrate the life-changing legacy of Michael FitzRoy, who inspired his mother, Elizabeth FitzRoy, to pioneer an entirely new way of supporting people with learning disabilities.

Over 70 years ago Elizabeth adopted Michael as a child and was horrified to be told that because he had Down’s Syndrome he would fare better in an institution. It sparked Elizabeth’s lifelong campaign for the rights of people with learning disabilities.

She was determined to provide a loving, family home for Michael, where he could learn, grow and flourish. Michael went to school from the age of three until he was 14 when he was home-schooled. He loved music and was delighted to get his first drum kit from Woolworth’s at the age of 15. Drumming was a favourite activity and he also enjoyed walking, reading, the theatre and tennis. Michael was known as a connoisseur of fish and chips, and as he got older, he developed a flair for cooking. HeÂ had an affinity with the sea, and was a fairly accomplished sailor.

While giving Michael every opportunity to thrive, Elizabeth built a network to provide a lifeline for other parents in the same situation who were struggling to bring up their disabled children at home with little or no support. She believed that all children with learning disabilities should be brought up in a loving home environment rather than an institution. When âDonec’, a children’s home in Hampshire, came up for sale she seized the opportunity to buy it and enlisted the help of friends and family to fundraise for the purchase, even selling furniture to make it possible.

Michael was thrilled to join his mother at Buckingham Palace when she was awarded the MBE in 1977. He said about their day:

Prince Charles met us all at Buckingham Palace. He presented the MBE medal to my mum. Then we had lunch at the Cardinal, then we did some shopping and we went to Westminster Cathedral. When we were seated for the ceremony the whole of Buckingham Palace sang the National Anthem. Then the Prince of Wales shook hands with my mum.

Michael died in September 1981 aged 38. His health had deteriorated during the last year but he still managed to holiday in Scotland and visit Yorkshire and Norfolk, celebrating his birthday sailing on the Broads. Instead of being confined to an institution, he had led a life full of love and rich experiences, and at the same time, inspired a movement to ensure that other people with learning disabilities could do the same.

FitzRoy has grown significantly since then and now supports around 800 adults with a range of learning and physical disabilities. We have registered care homes, day services and supported living services, as well as our ground breaking Love4Life dating and friendship project. What a truly amazing legacy to leave behind.