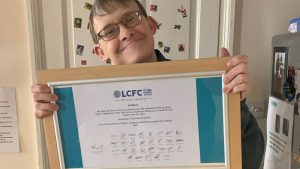 Robbie has always had a passion for football – in particular, Leicester City Football Club. Knowing his lifelong love for the team, support worker Megan decided to organise a special surprise for Robbie.

Megan said: “I support Robbie at his home in Norfolk and I know how much he loves Leicester City Football Club, so I decided to get in contact with the team and see if I could organise for them to send him something. I thought it would be great if we could get a picture signed by all of the team as a piece of memorabilia for Robbie.

“Robbie was brought up in Leicester so the team has always been close to his heart and a huge part of his life. I emailed the team to explain how much a memento would mean to Robbie, and they replied quickly saying of course they would help.

“The picture took about four weeks to arrive. He was absolutely over the moon when we gave it to him, he has the framed picture hanging in pride of place in his living room.

He has been smiling so much and showing everyone the photo ever since he got it, it has made me so happy to have done something for him that has brought him so much joy.

“Robbie has dementia, so not only has it made him happy, it has also helped Robbie remember parts of his life. It has been a brilliant conversation piece for him and has helped his memory.”

Keep Up To Date With More Stories Like Robbie’s