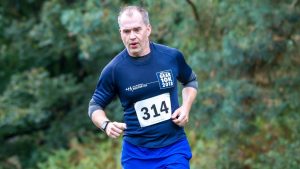 Running fanatic and former FitzRoy service manager Sam Dack is taking on the challenge of his life – the London Marathon. And he’s helping to transform lives at the same time.

It has been Sam’s dream from an early age to run the London Marathon, so the opportunity to take part and raise money for FitzRoy was an offer he couldn’t refuse.

He said: “I always knew I wanted to do the London Marathon, even before I got into running six years ago.

I remember watching it on TV as a child and always had it in the back of my head that I wanted to run it before I was 40. Well, I am 40 next year, so I contacted FitzRoy to see if I could run the marathon for them. I know first hand the difference the money I am raising will make as I used to work for FitzRoy.

Sam began working at FitzRoy in 2006 as a support worker at one of our Norfolk services, but quickly worked his way up to deputy manager, then service manager.

“I learnt a lot of transferable skills in the seven years I worked at FitzRoy. As a service manager you have to be good at decision making and risk management, all of which I still use now in my role as a project manager.”

Sam continued to talk about how his running training is going so far.

“The training was going well – before Christmas I was running half marathons and I was reasonably comfortable. But then Christmas happened and now I feel like I am back to square one! I am following a training plan which has definitely helped and there is a gym near my work so I can do extra runs on lunch.

“It definitely gives me the extra push when I am lacking a bit of motivation knowing I am running it for FitzRoy. I am setting myself this challenge that has an end point, but for some people just getting out of bed every day is a challenge. I want to be able to make a difference.”

Help Sam to reach his fundraising goal and transform even more lives by donating here.

Interested in taking on a challenge of your own this year? Take a look at what events we have on offer!