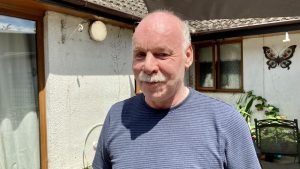 Steve is one of our newest residents at our Malvern care home Dalvington and The Oaks, after moving in March. In just a short space of time, Steve is healthier and happier than ever – and his mum Carol says she is ‘forever grateful’ for the team’s hard work.

Service manager Louise said: “At Dalvington and The Oaks care home, we support 14 people and recently had new residents move in. Steve is one of our newest residents who moved in in March, and his journey since then has been incredible.

“Steve is 56 and is registered blind and has an acquired brain injury from a motorcycle accident when he was a teenager.

“He came from an elderly care home and was suffering from depression during the end of his time living there. Lockdown had a big part to play in his mental health declining, but he was also quite isolated as he lived on the second floor, and was reliant on someone supporting him downstairs, which meant he didn’t have much independence.

“Steve’s mum Carol has wanted him to move to Dalvington and The Oaks for years. The ball started rolling about a year ago when we started discussing a plan to have Steve move. After what felt like a long time waiting, we got a call from his social worker and suddenly it was all systems go, we had about a week to get his room ready and prepare to welcome Steve into his new home.

“At first, Steve was reluctant to go out and felt quite anxious, which wasn’t surprising as he wasn’t given the same opportunities to go out in his previous home. But, bit by bit, he’s becoming more confident.

Steve is a part of a blind club which he goes out with a couple times a week, and he went to the pub for a meal a few weeks ago. He looked so happy with himself that he had achieved that. Previously he had turned down the offer, or said yes then changed his mind. But this time he went, and when he came back you could see the delight on his face.

“He’s also going to start going to the community group in the village to get to know more people, he’s already well known in the Malvern area and is always stopped by people in the village asking how he is. His mum has said how he has never looked happier and healthier, and is back to being himself again.

“From March to now Steve has settled in so well, he can communicate really well so we’ve had a lot of time to get to know him and find out what he likes and doesn’t like, and how best we can support him. He has short term memory problems but can remember things from the past really clearly, so he loves talking to staff about memories from when he was younger.

“We’ve also supported Steve to familiarise himself around the building with his cane, although it was funny because deputy manager Karen and I are awful with our left and rights. He was laughing at us the whole way around. He takes it all in his stride and he’s such a character, he loves a bit of banter with us.

“Although we support people mainly who have learning disabilities, the biggest difference supporting someone with an acquired brain injury is that for someone like Steve a lot of the support we offer is around his memory loss. He’ll need time to process information and he can forget things, but the team have adjusted really well to supporting Steve. We support people with dementia at Dalvington and The Oaks, and a lot of the skills my team have learnt from that have helped them provide Steve with the best possible care.

“Steve’s journey is only just beginning at Dalvington and The Oaks. With most people who move in you have an idea of what their interests are, but with Steve we’re starting from scratch because those opportunities weren’t there for him for so long. Slowly but surely we’re starting to see who Steve is and what his passions are in life, and we can’t wait to see what is next for him.

We’re constantly trying to push boundaries for Steve, we’ve even started looking into volunteering jobs which he has shown an interest in.

Steve’s mum Carol said: “I’ve known the team at Dalvington for years, and I just had the feeling that I wanted Steve to move here. It’s been 12 months we have waited, but I have been trying for years before that. When I found out it was all going ahead and Steve could move in, I was over the moon. It was a bit of panic because it suddenly all happened so fast, but it was also the feeling of joy. It has been the best outcome for Steve.

“The pressure and worry has just gone away. He lost a lot of weight in 2020, when I went to visit him once I couldn’t believe it, he was too thin. It was really worrying, but in just the four months he’s lived here he’s put on two stone and looks like himself again.

“My family and I are forever grateful for the hard work of Louise, Karen and her team. They’re brilliant, and they have made such a difference to Steve’s life. He’s enjoying life again.”