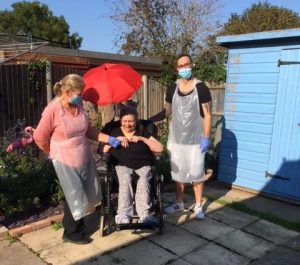 Our support workers always find a way to go the extra mile, so when Brenda and Steven noticed how unloved their garden looked at Allen Meale Way, they decided to use lockdown to their advantage and give the green space the overhaul it needed. 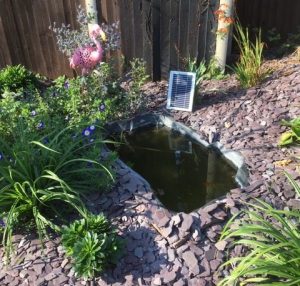 Brenda and Steven began working together at our supported living service in Norfolk 18 months ago. When the service went into lockdown along with the rest of the country, the pair spotted an opportunity to create a peaceful space for the people they support.

Brenda said: “The main part of the garden is in pretty good condition and well maintained, but there is an area at the end where a tree had been cut down that was covered in brambles and nettles. It felt like such a shame and like the space wasn’t being used as well as it could be.

“Steve came up with the idea of putting a water feature into the garden and did a lot of the manual labour himself, we searched for plants together and I grew some from seeds at home to bring in. Everyone at the service chipped in and the people we support enjoyed coming out into the garden and watching us, it was a great project to do over lockdown.

“Now it is being used by everyone, as a peaceful place to relax and even a place to hold birthday parties, like Phillip had over the summer. Phillip loves flamingos so we got him a light up flamingo for the garden, which he loves.”

Service manager Jan said: “The staff at Allen Meale Way have worked incredibly hard since coronavirus raised its head in March, not only have they continued their support of the people who live here, they have made every effort to bring extras to enhance the sensory needs of people, Steven and Brenda had the brilliant idea to transform an area of the garden, which had been sadly lacking in a bit of TLC.

“The wildlife garden has a solar fountain in the pond, it has seen many insect visitors already and the flamingo lights up in the dark, also using solar power. It has become a beautiful area for people to relax, and we’re doing our bit for wildlife.

“The idea of sensory being included was so that people who have an impairment with their sight can listen to the water from the pond, the plants that have been included have been chosen to give sensory stimulation with their sense of smell. The garden benefits all the senses – even the flamingo that lights up.”