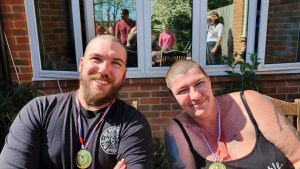 The team at Whitegates View, our registered care home in Hampshire, has faced a challenging time during lockdown, with four members of staff testing positive for coronavirus. However, this hasn’t stopped staff from putting residents first and keeping morale high.

Mandy, service manager at Whitegates View, said: “When we heard about going into lockdown we decided to have a barbecue thinking it was the last one we would have for a while. It was such a success we decided to make it a regular Wednesday thing. We have a different food theme each week and where we have such a big garden the people we support can distance themselves and still enjoy it.

“The feedback has been brilliant, the people we support love the Wednesdays and staff have said it is such a moral booster. They have thrown themselves into it, we have just had a Filipino themed week, we’ve also had South African and Indian, and we also do paintings of the flags and play music so it’s a whole experience. It has really taken off!

“The first barbecue we had was when support workers Storm and Ben decided to do a headshave. They had been talking about it for a while to raise some money for our service, and they managed to raise an incredible £3,000. At first they weren’t sure about their new hair cuts but now they love it and are both going to keep them shaved!

“Originally they wanted to raise money for a basketball hoop and frame for the garden with some additional garden games if they raised enough money, but fantastically they raised so much more than expected that we are also looking at purchasing a projector and screen for the garden to have movie nights.

“The people we support love the cinema, but it’s unlikely we will be able to go for quite a while, so we want to bring something they love to their home. Staff once again have got so involved and want to get bean bags for the garden, nice lights and garden furniture.”

“Unfortunately, during our time in lockdown we have had four members of staff test positive for coronavirus, and another six staff who self isolated after having symptoms – but during this the team have maintained a great morale and the themed Wednesdays have also really helped, everyone has been pitching in and having something to look forward too.

“We want to say a huge thank you to all of the team. When the first member of staff went off after testing positive it was really scary, and staff were of course a bit apprehensive but they all pulled together and were more concerned for the staff that we had off. At the worst point we had eight staff members off, but the rest of the team continued to work harder than ever making sure the people we support stayed positive and had the best possible care, and fortunately now all our staff and the people we support are healthy and well.

“With everything going on, we have also welcome our newest resident, Lauryn, who moved in two weeks ago and is settling in well. This is testament to how well all the teams are doing and how supportive they are of each other, they really deserve a huge thank you and well done.”