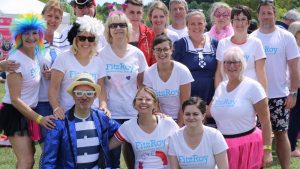 FitzRoy were out in force this year after the huge success of the 2016 Portsmouth Dragon Boat Festival. Not only did we have a boat full of almost 20 FitzRoy staff, friends, and family, we had a further three boats full of fundraisers on the water!

All the boats were there to raise money to keep Love4Life, our vital friendship and dating project for people with learning disabilities and autism, open.

The sun shone and loads of people came to support FitzRoy. We had four boats, each with teams of almost 20 people! The teams were: Purple Dragons from Purple and Vestey Foods, Cupids Arrow from FitzRoy Love4Life and Basepoint, Electric Eels and Electric Slayers both from SSEN, and of course the FitzRoy Love Boat.

The FitzRoy Love Boat has raised an amazing Â£1200 so far. There’s still time to donate to the team, just visit www.justgiving.com/companyteams/dragonboatfestival. Basepoint are matching every pound raised, so your donation is worth double!

We even came away with a winning team! SSEN Electric Eels secured an amazing 3rd place in the finals. They are also match funding their final fundraising total.

A huge thank you to everyone who took part in this brilliant day.â

We had a fantastic day and it was great to see so many families of the members of Love4Life there to support or even being part of the boat crew. It also ended up being a bonding experience for parents. The parents of two of our members who are dating met for the first time, something that wouldn’t have happened if we hadn’t been at the event.â

We are so pleased to be supporting FitzRoy Love4life and helping such a fantastic cause. It has been so heart-warming to meet some of the members of the project at the Portsmouth Dragon Boat Festival and chat to them about how the charity has impacted and improved their day to day life, some of the basic things such as making new friends and attending social events that we take for granted. When we heard FitzRoy were taking part in the event it was without doubt that we would help on the day, even enlisting husbands and family members to get involved.Â We are really looking forward to supporting many more FitzRoy Love4Life events!â