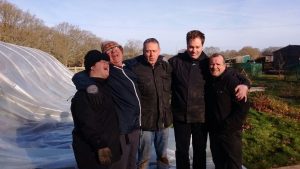 A horticulture project within the beautiful grounds of FitzRoy’s Boldshaves Oast, registered care home in Kent, looked to be in trouble after some winter gales hit their large poly tunnel.

The project is carefully tended to by many of the residents led by Tracy Davison, their Horticulturist Therapist. Tracy told us more.

When I got into work the morning after a night of gale force winds, I was faced with the bare skeleton of a poly tunnel and a crop of frozen (not so hardy!) annuals, covered in a thick frost.Â The large sheet of polythene that once protected delicate seedlings was now like a giant sail, flapping wildly against the metal hoops.

Disaster was the first word that sprung to mind, I’m sure even tears came to my eyes on that freezing early morning.Â But after coffee and a de brief with some colleagues and phone calls to fellow horticulturalists, the cavalry were formed and together we began the task of recladding the tunnel.

Residents and garden crew members Keith, Jonathan, and Oliver use the project every day. Rain or shine, they are loyal to the garden and they love every moment they spend there.Â In their eyes, it’s their job to monitor the growth of every seed that is planted through to harvest and then cooking.

Steve and Chris, who work at Boldshaves Oast, prepped the metal hoops while the garden crew footed the ladders to keep them safe. Then together everyone rolled the new polythene over the hoops. After a very long day rewarded by hot dogs cooked outside on the fire and left over (well in date) Christmas cake, most of the job was complete.

Since then, seeds have been sown and potted on, new door latches have been added, and we’re up and running again. It was an epic effort by all and the sense of achievement was euphoric. We can now look forward to another prosperous year of plant sales, workshops and vegetable harvest thanks to everyone’s dedication and hard work.”