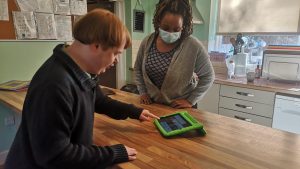 Assistive technology has the power to open up a world of independence for the people we support. Adam, who we support in Suffolk, has gained even more independence over his morning routine with the help of the Snap Core First App.

Snap Core First is a Makaton based app which can be used by the people we support to make choices and communicate with others around them.

After noticing Adam wasn’t eating his breakfast like he usually would, the team at Lethrede decided to use the app to help Adam communicate what he wanted.

Support worker Joanna said: “Recently he has not been eating his breakfast, he’ll push it away and if we get him something else he won’t eat that either.

“I used Snap Core First to help Adam communicate whether he wanted food or drink, or nothing at all. He selected drink, and we realised that actually he didn’t want his breakfast prepared for him straight away, he wanted his cup of tea first and his breakfast a bit later. It was a massive breakthrough for Adam, now when he’s hungry he’ll come to the kitchen and point to the tablet then use it to tell us what he wants. 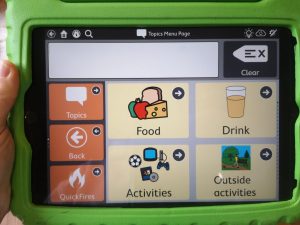 “The other morning was the first time in a while he came down and chose the food option rather than drink, so that’s what we made him and he ate it all.

It’s such a huge thing and has given Adam so much independence. He should have the ability to decide for himself, just like how I might wake up hungry some mornings, but other mornings I might not want to eat until lunch.

“The whole team at Lethrede have been on board with helping Adam use the app on his tablet – when I first set it up I made a video showing how it works to send to the team so there is always someone on shift who knows how to use it.

“Since having this control over his morning routine, Adam is a lot less frustrated and is happier. Understandably, he can get frustrated when we don’t understand what he is trying to communicate, so using the tablet has removed that barrier.

“He’s responded to the app so well, we will definitely continue to use it and see his communication skills grow even more. It’s also a real reminder to not just assume what the person we are supporting wants, but to give them the choice, control and independence over their decisions. Using Snap Core First has given Adam that control.”

“More than two-thirds of the people we support use a range of non-verbal communication, where they have to rely on other people being able to interpret what they want to say. They may use gestures, expressions, photos, symbols, pictures, objects as well as words.

“They may not have a range of vocabulary or the confidence to use it, and technology can help them build that confidence. We have rolled out the Snap Core First app and iPads across many of our services to try and make sure that more people we support have the opportunity to be heard.”

Carrie, FitzRoy’s assistive technologist, said: “Joanna has truly demonstrated our FitzRoy values of seeing the person, being brave and being creative in setting up the iPad for Adam and supporting him and the team to learn how to use it. Introducing a communication aid is rarely straightforward but this fantastic example demonstrates the possibilities for the people we support when we are able to find the right solution for them.”