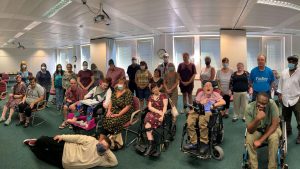 After more than two years, the people we support came together once again at Nationwide – a FitzRoy forum where members help to make decisions for the future of FitzRoy.

Nationwide gives the people we support the opportunity to have their say about FitzRoy and discuss what changes they would like to make. Stephen, who lives at Coleshill Road in Birmingham, has been a Nationwide member since it began over 15 years ago.

He said: “I like going to Nationwide because I get to see lots of people. I like seeing Anna, our chief executive, and I like seeing the trustees. We talk about lots of things like the care we receive and what we would like to change.

The three things I like about Nationwide are: seeing lots of different people, sharing ideas with everyone and making a difference to FitzRoy. I love it.

With covid restrictions easing, Nationwide members were able to meet this month for the first time in two years.

FitzRoy’s head of quality, Kirsty, said: “We were so pleased to be able to welcome everyone back at Nationwide again, we had a brilliant turnout of 19 people. Three or four existing members attended and the rest were brand new members who hadn’t been to Nationwide before.

“Because it had been so long, the purpose of the event was to refresh everybody on what Nationwide does and what it is to be a member. We also spoke about the role of the support worker at Nationwide, how it is an event for the people we support and they are there only to advocate for them.

“When we meet, we discuss different topics and members have their say to help shape the decisions FitzRoy makes. We discussed FitzRoy’s 60th anniversary next year and everybody had really great ideas on how we could celebrate. We also discussed what good active support looks like, and how important that is for the people we support to feel truly independent.  Nationwide member Steven said: “I like to do things for myself and staff support me to be as independent as possible.”

“We realise we are living in a more digital age now, and we want to incorporate that into Nationwide so even more people can attend. Members discussed it and decided we would meet four times a year, two of those events being in person and two taking place online. This means the people we support who may not be able to travel also have the opportunity to have their say.

“It was a really successful first Nationwide event after covid, having a mix of original members and new members meant we had a really varied discussions. Nationwide embodies who we are at FitzRoy, we don’t make decisions in isolation, we involve the people we support and make sure we are led by what they want.”