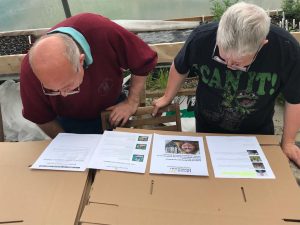 Judith, Oliver and Jonathon joined hundreds of thousands of voters across the nation yesterday and had their say.

Michael is the deputy manager at our registered care service Boldshaves Oast in Kent. He said: “We researched the information from all the different parties, so the people we support had the information they needed to make their choice.

“It’s so important to be informed when making a decision like voting, so we held meetings every day leading up to election day for our residents to discuss what the different parties are standing for, and everyone had really open discussions. Everyone was respectful of each other and listened to each other’s views and opinions. We have also been encouraging the people we support to watch the news.

The people we support have the same human rights as any one else, and they should be able to exercise that right in any way possible, including being encouraging to have their voice heard and their vote counted.

Kimberley, service manager of our Nottingham support at home service agreed. Her team support people with a range of mental health conditions to live in their own homes. “They might feel that no one will listen to them or that their voice is not valued. We have to challenge that, and support them so they are informed and feel able to vote.”

I think it is very important that everyone should have the chance to vote.

Judith, Oliver and Jonathon all enjoyed voting yesterday, and after being asked why they chose to vote, Oliver said: “I want to be able to vote for the person that I like.”

Jonathon said: “I think it is very important that everyone should have the chance to vote.”

After placing his vote, Jonathon said: “We have just been to the polling station. It was nice, it was easy!”

In Hampshire, Beverley and Denise were supported to vote by our Hampshire support at home team. Beverley said: “I was really excited to vote.”