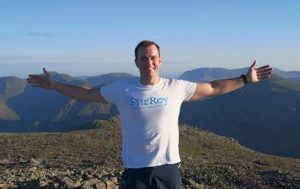 Darren Mildon undertook the incredible National Three Peaks Challenge to fundraise for FitzRoy as his younger brother Joe has been attending the The Maltings day service in Norfolk for over five years.

Darren said:
Joe loves going to The Maltings day service. The support workers there are great with him and they have taught him how to do simple things that most take for granted. He really has struck up some amazing connections with both staff and the other people who attend, some of which will last a lifetime.â

The challenge entailed conquering the three highest peaks of England, Scotland and Wales, that is Scafell Pike in England, Ben Nevis in Scotland and Snowden in Wales. The hike is 23 miles, with an ascent of 3064 metres. Darren and his four friends completed the challenge in a remarkable 23 hours and 30 minutes.

After a 10-hour drive to Ben Nevis, the group reached the summit in time to witness a beautiful sunset. They then travelled through the night to get to Scafell Pike, where on reaching the peak, they were greeted by an awe-inspiring sunrise. Then on to Snowden, where they only had five hours to get up and back down the mountain. With temperatures of 28Â°C and little or no shade, it was no mean feat. On the same day that England beat Sweden in the World Cup quarter finals, Darren said it was great hearing other hikers erupt on the mountain as England scored twice.

Darren described the event as amazing and one that he’d never forget. He said:
The whole experience was made even better knowing that I’d raised a fantastic amount, from so many generous people, for an incredible cause.â

Kerensa Palmer, Service Manager at The Maltings, said:
Darren’s achievement is incredible. I don’t know how he did it! The staff here and his brother Joe really appreciate the sheer effort and determination he put into fundraising for us.â 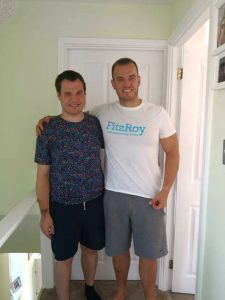 Joe is part of a team of community volunteers from The Maltings, whose task it is to maintain the gardens at Gressenhall Hall Farm and Workhouse Museum. The funds the Darren raised will go in part towards more gardening equipment for the volunteers, as well craft materials for the service’s social enterprise project.

If you’d like to take on a challenge to fundraise for people with learning disabilities and autism, then you can find out more here or email fundraising@fitzroy.org