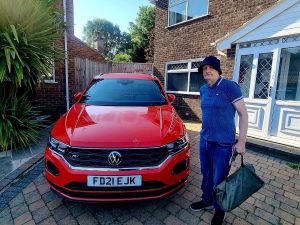 Tony loves driving, and when the time came for him to buy a new car, the team in Nottingham found a unique way to enable Tony to make the decision on his own.

Service manager Emily said: “Tony loves nothing more than sitting with catalogues and flicking through the pages. It’s how he chooses what he wants, so when the time came for him to think about his new car, it gave me and my team inspiration.

“Tony loves going out in his car, it is a massive part of his life and he loves the independence it gives him. He loves driving, and he especially loves to go out at Halloween and Christmas to see all of the festive lights.

Last time Tony had a new mobility car he wasn't that involved in the decision, but when the time came round a few months ago we all really wanted him to have the choice and make the decision of what car he wanted himself.

“We came up with the idea of making his own catalogue to help him choose the make, model and colour of his next car. The team all picked two cars each that would be accessible for Tony, and I went online and found photos of the cars all in white so Tony could pick the make and model without being influenced by the colour.

“Tony loved the catalogue idea and after looking at all the options he chose a Volkswagen T-Roc. I found out what colours each of the cars came in, and added those to the next part of the catalogue so he could choose what colour he wanted – Tony picked red. All the photos of the cars and the colours in the catalogue had Velcro on the back, so once Tony had made his choices he could place his chosen car and colour on the back page for us to see.

The whole process was a really positive and successful experience for Tony and the team. Although the car took longer to arrive because of covid, I honestly cannot tell you how happy Tony has been.

He sits in the living room and just loves to be able to see his car on the drive, he sees it and says ‘my car my car!’. It was timed perfectly with restrictions easing so Tony is able to go out more in it, he wants to be out all the time.

“Not only is Tony overjoyed with his car and the fact he made that choice on his own, but we also know how well the catalogue has worked for him. It has given us the tried and tested process that we can now use for other areas of Tony’s life, like what new bedroom furniture he wants.

“It’s great to see him so happy and for him to have made that decision himself. All he needed was the right tools to make that decision, and that is what FitzRoy is here to do.”