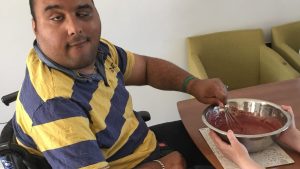 Our goal for the people we support is that we find them the right home, with the right support and a creative and enthusiastic staff team who get to know them.

This year we opened two new services in Oxfordshire, each with five individual flats and a communal area. Over the last six months new tenants have been moving in to their new flats and are ready for more independent living and their ‘forever home’.Â Our staff have worked hard to get to know them and build a relationship to help them achieve their goals.

Service Manager Jade Harvey tells us about the transformation in action she has seen with the people we support at these services.

Chris moved to us after living in sheltered shared accommodation. Initially, he didn’t want to accept our support at all and kept himself to himself. He was anxious, for example, he wouldn’t let us help him with his lunch, and he lost weight as a result. Once Chris got to know and trust us we saw a huge change in him. He now uses the communal area several times a week and has his meals there, he goes for coffee in his neighbour’s flat, invites people into his flat, sings and plays on his decks.

Luke (pictured above) had a brain haemorrhage when he was eight and was in a coma for seven months. Before he moved in with us, he was on medication daily for his challenging behaviour. We know that challenging behaviour is often linked to frustration about not being able to communicate and be understood. We have listened to Luke and worked hard to understand him and give him the support and help that he wants. Since living with us, he has only had to have medication three times in the last ten months.

David is a wheelchair user and used to get a taxi into Oxford for the day to meet friends. But when his cab driver retired, he wouldn’t use anyone else and missed out on his trips. Now our staff take him to the train station and he gets the train on his own to spend the day in Oxford with his friends. Using public transport has built up his confidence, so now he is also spending more time locally and getting more involved. He recently expressed an interest in horse riding and swimming, something he would never have mentioned before.â

FitzRoy Chief Executive Anna Galliford, who recently visited the services, said: “The change and shift in people’s experiences and responses since living here is fantastic.”

Jade adds: “As we are here every day, we can sometimes lose sight of the difference we’ve made. But when we sit in the review meetings, that is when we really notice the amazing transformations that people have made.”