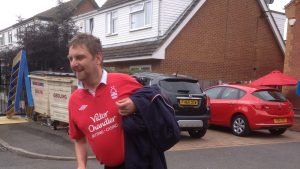 Steven, who is supported by FitzRoy in Nottinghamshire, had a long period of feeling unsettled. With FitzRoy’s help, he has turned his life around. Kimberley Knights, FitzRoy Deputy Manager, told us how.

Steven had yo-yoed between supported living and hospital for over 18 months. After short periods of settled behaviour Steven would display challenging behaviors that providers felt unable to manage. When he joined FitzRoy at Hall Drive in December 2015, we were determined to stop the yo-yoing, and help him to overcome his challenging behaviours.

His flat was full of all his belongings, but the staff team soon realised this was too much for him, and they moved many of them out of sight. This helped to calm Steven, and prevent him from harming himself and others. His environment was adapted to be just right for him.

After much learning and developing, we felt Steven was finally settled long enough to start integrating everyday items back into his flat. We began with a kettle, once we were sure he could tolerate this out on his worktop, we followed it with a tea canister. Steven has always been a tea belly and would often interact with staff making a brew, passing a cup and getting the milk out. Through FitzRoy’s Active Support, Steven is now calm and settled, and recently made himself his first cup of tea. We hope this is his first of many!â