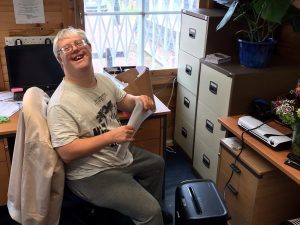 Assistive technology has the power to open up the world to the people we support. For Keith, a new communication app has meant even more independence in doing the things he loves.

Keith is the life and soul of our care home in Kent, Boldshaves Oast. He loves taking on new challenges and has recently been using the Voice iTT app to make communication easier. Deputy manager Michael said: “Keith lives life to the full – he is a very competitive person and gets involved in everything. Recently he’s started working in our office on Fridays to help us with filing and shredding. It’s been going really well, he loves having work to do and he always comes in dressed smartly for the job.

“Keith is really sociable and people who know Keith well can understand him well, however people who don’t know him can struggle and often ask him to repeat himself. This can be really frustrating for Keith when he knows what he wants to say but the other person doesn’t understand. He has got quite upset in the past when this has happened so we looked into ways we could help Keith to communicate more easily.

“FitzRoy’s assistive technologist Carrie and practice development lead Elaine introduced us to the Voice iTT app. It’s a voice recognition software which helps people with unclear speech to communicate more easily with people around them. You record words and phrases so the app recognises your voice, then you can use the phrases to do anything from saying ‘hello’ to ordering food at a restaurant.

“We started using the Voice iTT app with Keith and he took to it so quickly. I was concerned about whether he would enjoy it because it can be a bit repetitive, you have to record phrases quite few times, but he’s been brilliant.

We have been working on phrases about what he likes to eat and drink and what he enjoys doing, so he can go out into the community and order a meal independently.

“This app means that Keith now has another way of communicating and he has even more independence. It has been really successful so far and other residents have begun to use it as well. We can’t wait to see Keith use it in the community.”

Assistive technologist Carrie said: “The people we support may often be understood by those familiar to them but have difficulties making themselves understood to new people. This can be really frustrating for people to not be able to get their message across.

“The Voice iTT app removes that barrier and offers people greater independence in their communication. We’ve been working in partnership with Voice iTT and the Karten Network to test the app and its usability and it’s brilliant to see what a positive effect it is having for Keith so far.”